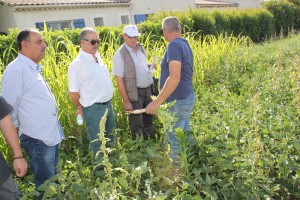 On 10th and 11th September 2015, during a trip in France, a group of four farmers from Maghreb visited the farm of Daniel Bremond, an agriculture in Oraison in the Alpes-de-Haute-Provence, and its test platform of direct seeding and mulch based cropping, conducted with the research center Arvalis. The opportunity for these Mediterranean farmers to exchange on agricultural practices.

Rachid Boukhlif (Setif – Algeria), Aziz Zine El Abidine (Meknes – Morocco), Salah Lamouchi (Apad president, Mateur – Tunisia) and Noomen El Euchi (Jendouba – Tunisia) are farmers in the Maghreb region. They use minimal tillage or direct seeding techniques for over a decade but are facing difficulties in the implementation of these techniques. Discovering Daniel Bremond’s work and experimental techniques of mulch based cropping –coupled with direct seeding – they could explore additional solutions to conservation agriculture practices tested in their countries. Exchange between farmers from both riverbanks for the Mediterranean see were very valuable. It triggered new ambitions to test a new concept of agriculture to preserve soils and nourish people healthily. We could highlight two relevant quotes from these Mediterranean farmers’ exchanges:

“We can substitute metal by vegetal”

“All these seeds, they are my tillage. A handful of seeds does more than a big tractor”

They shall now test and adapt those practices to their own context, which has constraints and additional specificities in the south riverbank of the Mediterranean Sea.

Setting up test platforms on farm A specific discussion has been organized with an Arvalis engineer, Stéphane Jezequel, who follows for 3 years test platforms set up by farmers, such as the one from Daniel Brémond. Discussions focused on the partnership settled between farmers and researchers, on the methodology used to follow the platforms, etc. Farmers from Maghreb were very interested in those discussions, and would like to start the same kind of partnership in their country. 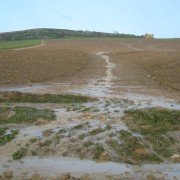 Meeting between French producers in soil with cover crops, Lucien Séguy and Arvalis

Movie – Proud to be a professionnal farmer – Madagascar

Partnership between Fert and Isara-Lyon
Scroll to top