In Madagascar, potato cultivation occupies an important place in agriculture.However, it is now in trouble with the resurgence of diseases that affect yields.

A die weight in Malagasy culture 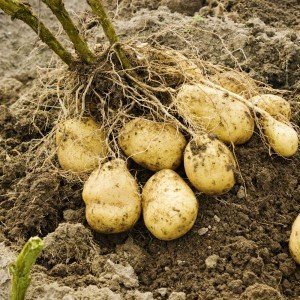 The potato plays an important role in the Malagasy diet to supplement rice during the lean period. This is one of the most promising economically for farmers productions (favorable gross margin, yet broad market …). Domestic production reaches up to 500 000 t.

Moreover, Madagascar, the potato can be planted:

The majority of Malagasy farmers grow potatoes in against-season rice; it is difficult to grow in the rainy season and to fight against diseases.

Of devastating diseases for crops

“In 2008, with the money that I got with the sale of potato seed, I could make my one-story house. But right now, I can no longer produce quality potato because there are many diseases. »

The last 5 years, the sector faces a worrying resurgence of diseases, mainly bacterial blight for which no curative solution has yet been found. This is an obstacle for the development of the sector. The producers’ access to healthy seed has become very difficult for farmers and production is experiencing a steady decline.

A relevant support offered by the Ceffel 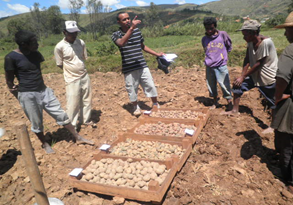 In 2013-2014, to effectively contribute to solving these problems, the association has developed Ceffel technical support activities and experimentation around the multiplication of healthy seed potatoes. Different actions were carried out in the region and Vakinankaratra Amoron’i Mania where the majority of potato producers are.

Partnerships have been made with farmer organizations in both regions (VFTV in Vakinankaratra and Fifatam region in the region Amoron’i Mania), but also with the device of FRDA present in these two regions to finance this action.

Among the activities, we can highlight:

The 2013-2014 year was a pilot year for the revival of the potato seed sector in both producing regions. From 2015, this action will be extended to other areas. Indeed, players Fifata group, supported by Fert, have set up a project of potato seed multiplication based on the actions performed by the Ceffel.

The good start of the mont Meru’s fair

“And for you, family farming what does that mean?” : Young winners rewa...
Scroll to top