“And for you, family farming what does that mean?” : Young winners rewarded

Monday, the 16th of March 2015 was held the presentation of the contest prize “And for you family farming what does that mean? ». Organized by the CNEAP, Fert and Education network to rural development and international solidarity, the competition took place from July to December 2014, on the occasion of the International Year of Family Farming. 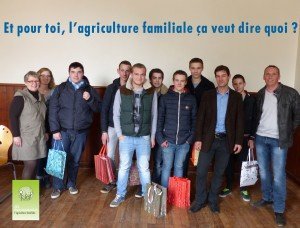 A young, dynamic and passionate sponsor

The awards were presented by Ghislain Mascaux, sponsor of the competition and to Bugnicourt young farmer in the Northern Department.

An exchange time was then held with young people around a game – Photolangage of Feeding the World, Educagri editions – which allowed Ghislain to present his career: son of farmers, he took over the family farm very young, at age 21, after completing a curriculum in institutions of CNEAP.

Ghislain also took advantage of this discussion to give some advice to young people wishing to become farmers: do not hesitate to travel to see other ways to produce and to get new ideas on how to conduct its operations, but also to defend his profession and passion by engaging in professional agricultural organizations and communicating positively on agriculture.

Fert won the award for “the most impactful initiative” in Livelihoods Camps...
Scroll to top