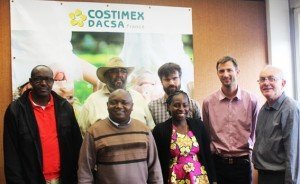 A delegation of four representatives of the Kenyan farmers’ organization CGA, participated to a study tour in France from the 5th to the 15th of October 2014, meeting numerous farmers’ organizations. After 10 days of visits and intense discussions in Paris and Alsace region, the participants unanimously underlined the relevancy and success of this initiative.

This study trip was organized by AGPM (French General Association of Maize Producers), who mobilized its partners in Alsace region, in the framework of a partnership between CGA, AGPM and Fert. This tour benefited of the financial support of the French Embassy in Kenya. It was a logical additional step forward after several missions of the partners in Kenya, strategic discussions and assessments on the cereals sector in Kenya, and discussions on the relevancy of a partnership between the three organizations.

A study tour aimed at inspiring the strategic thinking of CGA 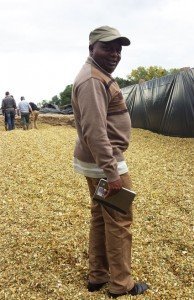 In Kenya, cereal and more precisely maize, are grown by every farmer, mostly consumed by the family, and surplus being sold. This low commercial orientation as not been in favor of the organization of the cereals value-chain. Kenya is nowadays a net importer of maize, while national demand is increasing and production potential could be better fulfilled. The sector is facing several challenges such as difficult access to storage facilities, quality inputs and equipments, advisory services and financial services, on top of which structural problems come, such as climatic hazards, land fragmentation or lack of control on land, and very low communication infrastructure.

Already involved in the field in different actions aiming at building capacity of farmers and in lobbying activities, CGA is since 2013 engaged in a strategic direction of developing economical services to its members. Indeed, CGA created this year a national cereal growers Sacco (Savings and Credit Cooperative), targeting cereal farmers, and is currently developing its technical and commercial information virtual hub, CerealMart. Wishing to go further into developing its activities on the ground in different counties of Kenya, CGA expressed its interest to meet French organizations of the cereals sector.

A large diversity of actors met

The program of the study tour was directed towards to major questions : how were economical services to farmers developed and are managed nowadays, to ensure an efficient functioning of the maize value-chain in France? 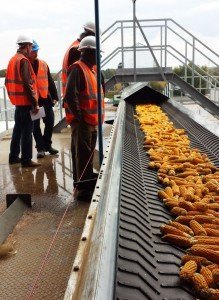 Meetings in Paris within the Cereal Growers Group allowed the delegation to understand the missions, functioning and financing of the different national tools, and the way they are linked to the ground:

A meeting with Axema, suggested by the French Embassy in Kenya, allowed to imagine further ways of collaboration with CGA, aiming at bringing more French relevant equipments to Kenyan market.

A numerous field visits and meetings in Alsace helped to understand how services to farmers are organised and managed by themselves. A good illustration was through the meeting of ‘Groupe Comptoir Agricole’, which is the biggest maize producers cooperative in Alsace, through the development of its different ecomomical entities for input procurement (“Eurapro”), marketing of cereals (“Eurepi”) and animal feeds processing (“Lorial”). Discussions with three local farmers elected in their organizations emphasized on the importance of their deep involvement in the services they need, such as cooperatives, farmers’ credit unions, “Groupama” (farmers’ insurances), and other representative bodies and unions.

Visits to private companies of the sector helped to understand the relationship between actors along the value-chain, from production of maize seeds (KWS) up to trading and processing of maize (Dacsa-Costimex miller and Meteor brewery).

A source of inspiration of CGA in Kenya 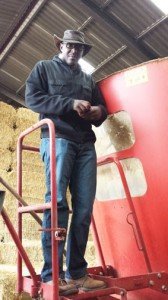 The mission’s debriefing meetings confirmed how relevant was the program and proved that, even if contexts are different between France and Kenya, principles which led French farmers to organize themselves and develop together relevant services, can easily inspire cereal producers joining CGA. Those are:

The good combination of both vertical collaborations (from farmers to its organization and along the value chain) and horizontal collaborations (farmers together locally or economical actors of the same area) are essential elements of understanding, which will further inspire the strategic reflection of CGA, and especially is objective of being closer to farmers on the ground.

Exciting new meeting for the network of regional correspondents EADR-SI