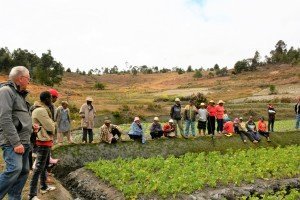 In the municipality of Alatsinainy Bakaro, the French association Agir Loire Océan has established local relationships to help improve the living conditions of the inhabitants. Since 2015, the installation of an agricultural adviser on the spot, following a rapprochement with Fert and organizations of the Fifata group, has shown the first signs of changes in farming practices that improve food security and reduce deficiencies, particularly among children.

The association Agir Loire Océan is the delegation of Loire-Atlantique Vendée d’ Agir ABCD, a national association that brings together nearly 3500 retired executives throughout France (teachers, engineers, etc.). It operates in France and abroad, and is organised through delegations or branches in each region. As far as our delegation Agir Loire Océan is concerned, it was following exchanges with the Madagascar consul in Nantes that links were forged with the municipality of Alatsinainy Bakaro, 75 km south-east of Antananarivo on the high plateaus of Madagascar. There are approximately 26,000 inhabitants.

A group of about fifteen volunteers from Agir Loire Océan follow this project in Madagascar. Depending on our expertise, we support a particular action. For my part, I am the agricultural project. Our first actions were directed to the benefit of youth. They made it possible to build a school, latrines, wells or even rehabilitate a local hospital, train teachers and set up school canteens during the lean season: we quickly realized that absenteeism was due to famine in many families who no longer sent their children to school during this period from January to March, when stocks are often at their lowest.

By relying on a Malagasy organization specialized in agriculture, the Cite (Technical and Economic Information Centre) we financed a study that showed great possibilities to increase rice yields and the interest of diversifying food locally by introducing vegetables to compensate for deficiencies and health problems. But with only two missions of 4 weeks each year, our small association realized its inability to follow up such an action in the long term. We needed to rely on local expertise. 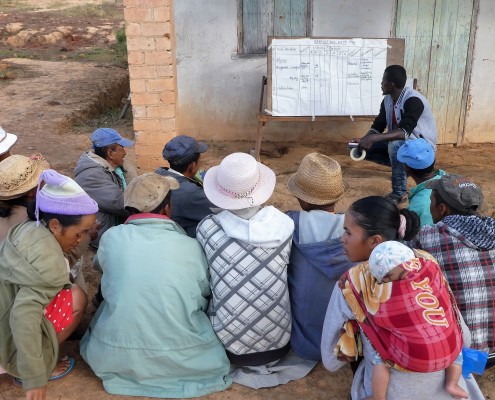 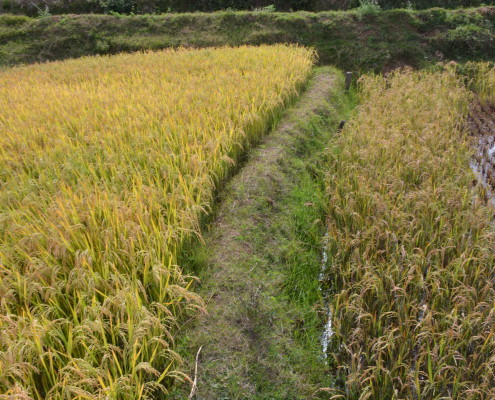 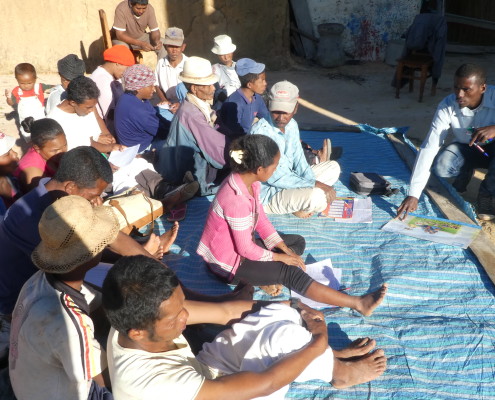 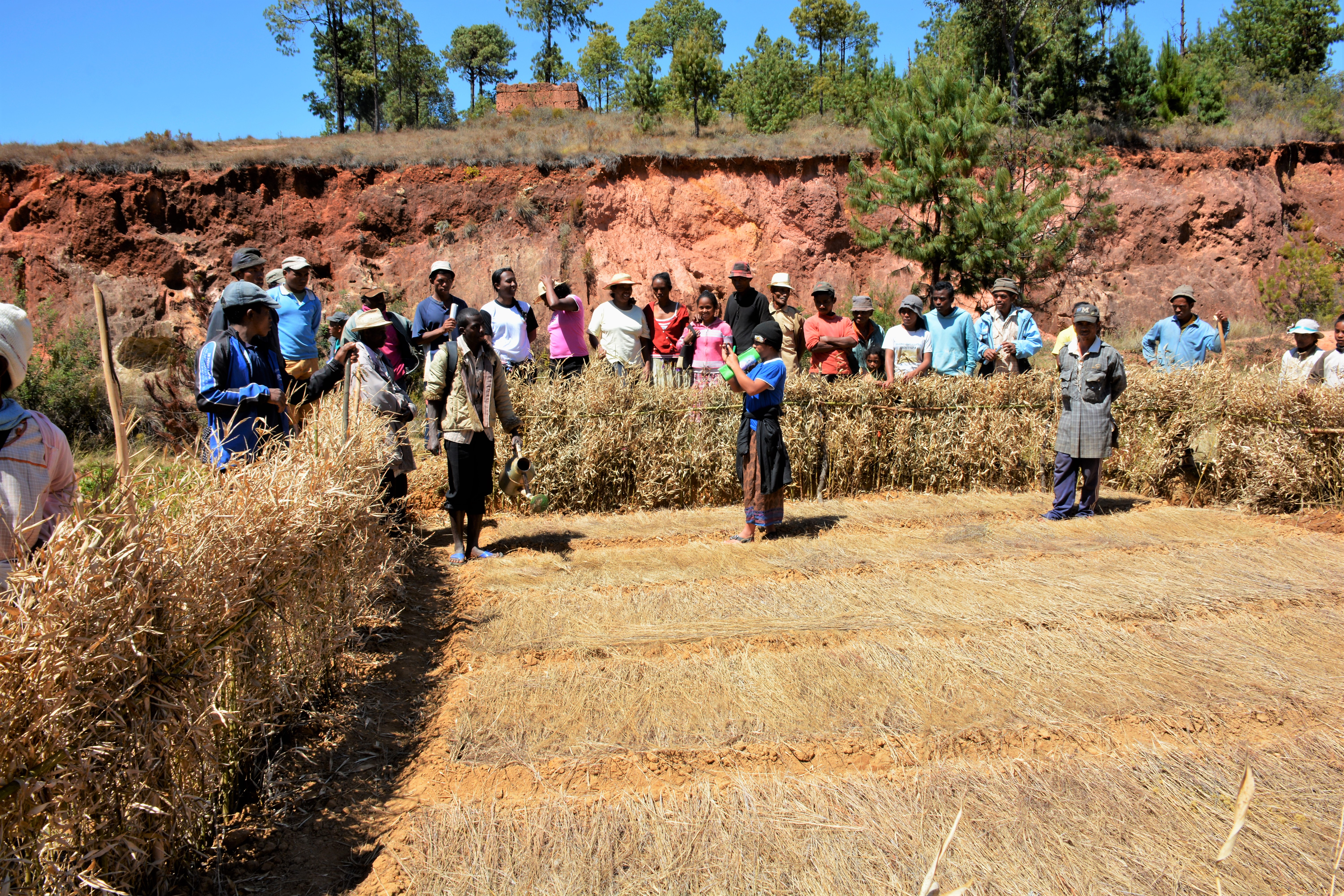 In October 2015, during a visit to Antsirabe, we met Fert and were seduced by the work carried out with farmers’ organisations, in particular the training courses carried out by Ceffel in his centre in Andranobe or in the localities, in the field with farmers. Discussions with the local Fert team and the Ceffel director led us to consider funding the recruitment of a local agricultural adviser in the commune of Alatsinainy Bakaro to help farmers diversify their production and train them in other practices. Ceffel allowed us to get in touch with different young people trained at the centre and we proposed to Kennedy to work on the commune. At the same time, Fert and its Malagasy partners (Fifata, Ceffel, Cap Malagasy) who already have several dozen consultants trained in the highland regions and on the outskirts of Antananarivo, are monitoring and advising Kennedy in its activities. He has a good level of Bac + 2 training, and the additional training at Ceffel allows him to be very relevant through the implementation of a method and tools of “local agricultural advice” that meet the needs of farmers in the commune. 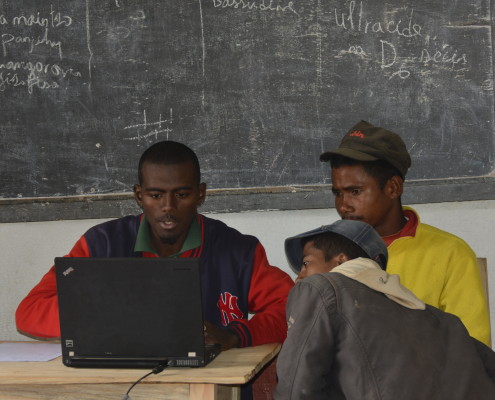 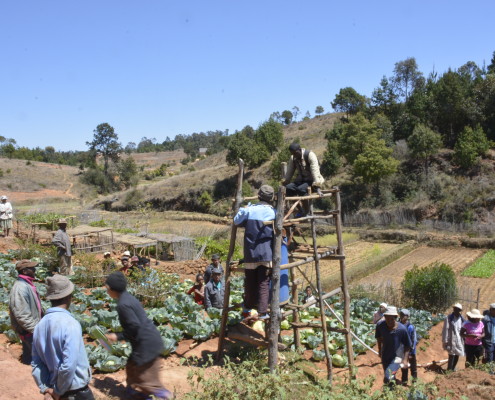 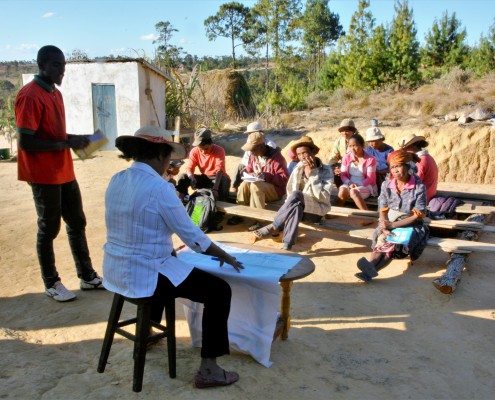 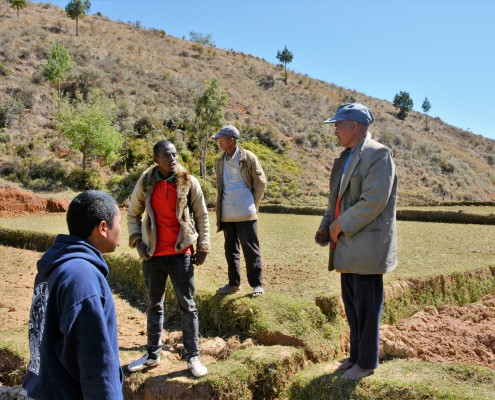 Our goal was to train 80 farmers a year: 40 on rice production, 20 on potatoes and 20 on beans. The agronomic potential in the commune is severely degraded, the soils are not very fertile and the practices poorly adapted. Since 2016, the local counsellor on site has been able to train them in compost production and the use of bio-pesticides. We have ensured the supply of good quality seeds and today yields are changing very favourably! The counsellor is also involved in the breeding of local chickens and pigs, which is a relatively short cycle operation that allows farmers to generate cash more quickly.

After two years of activities, 160 producers have been trained, and even more so than the technical aspect, Kennedy manages to improve the producers’ organization and the dynamics of the commune. Based on Fert’s on-site teams of consultants, and with the investment Kennedy is putting into his job, we are very satisfied and happy to see that things are progressing.

But we remain aware that our action is very modest. We are a small association, our means are limited and soon Kennedy alone will not be able to follow up on all the trained peasants who ask to be reassured. This is why, thanks to funding mobilized from local authorities in our region or private foundation, rather than setting up a second advisor locally, as initially envisaged, we have, on the advice of Fert, privileged to strengthen Fert’s technical support with specialized technical advisors who will come to the area from time to time to reinforce the training of relay farmers and bring out peasant leaders. These relay farmers are chosen as young people, and must be motivated by their role of demonstrating and providing basic technical advice to their peers in order to change attitudes. These farmers are also relays of basic services (vaccination, management of a pharmacy box, seed production, etc.) that respond in a very concrete way to the needs of producers. Visits to the surrounding localities were organised, particularly in the regions where the producer organisation Fifata, Fert’s partner, is present. With these visits, the idea is to be inspired to make young leaders emerge, and thus ensure the succession, but also to organize producers in each fokontany and at the communal level so that the services are sustainable.

In 2018, Kennedy will also work with schools and the establishment of vegetable gardens to feed school canteens, which may also motivate young people to become farmers in the future. Malagasy peasants face many difficulties in a deteriorated socio-economic context, where corruption and insecurity prevail. Nevertheless, by creating a collective dynamic, with concrete and visible results, we are hopeful that if this action can be sustained, the Malagasy farmers will benefit from it. In this very difficult context, they will hopefully use this small path of progress.

“At the beginning of my work, it was hard to work with peasants who only asked for donations and did not see the interest to work in groups…, in addition access to the commune is not always easy.

But over time, farmers have seen the interest of the local council and today, potato yield has increased by 50%, rice has almost doubled even if the climate was not very good in the last two years. The groups are gradually being set up, which takes time, and it is necessary to continue to support them notably on the associative life and the management of materials in common which have been acquired thanks to the support of Agir (beater, rice mixer).

The potato has real potential in the commune, and thanks to the support of Agir, the farmers have planned to build 2 storage buildings in 2018, in order to reduce losses, sell better, and even form a communal union in order to perpetuate the services set up thanks to the council.”

Latest meetings in Tunisia for farmers of the “Conservation Agriculture...