International NGOs call to the revival of development in Madagascar 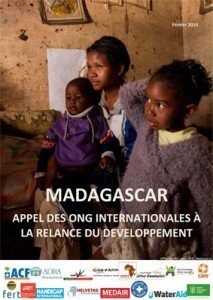 Madagascar is a country in difficulty for several decades, and the suspension of aid following the 2009 political crisis has exacerbated this process of degradation. The gravity of the situation faced by the Malagasy population remains largely unknown and Madagascar is now the most under-aided countries in the world in terms of public support.
In recent years, aid has done too in terms of the only political crisis. While a chance of a crisis seems to be confirmed, it is necessary to depoliticize and dispassionate assisting the country to only be confined to vulnerability criteria.

How to describe the humanitarian situation and extreme poverty in Madagascar? It always suffers from a lack of visibility and readability. The organizations of civil society have a major role to play to testify to the situation faced by the population of Madagascar. International humanitarian and development NGOs, each working for several years in Madagascar, is here trying to exercise, by synthesizing their analysis according to their field of observation. According to them, in view of the deterioration in the social, economic, health and environmental, it is urgent today that all actors re-engage together in a coordinated and complementary manner in the development of Madagascar, as a priority in social sectors. The State shall engage in the delivery of basic social services, so that every citizen – including the most vulnerable and excluded – can enjoy their fundamental rights. To achieve this, civil society and must take its place; State regain its role in particular through the definition of clear policies, realistic and concerted; and the international community, while mobilizing additional funds, to ensure that control mechanisms, transparency and accountability are respected.

Read the document signed by 16 international humanitarian and development NGOs

International non-governmental organizations at the origin and signatories of this appeal are:

All working for several years in Madagascar.

The activity “Awareness raising and international solidarity” consolida... The Arbomed meetings: February 20th and 21st, 2014 in Marseille
Scroll to top

International NGOs call to the revival of development in Madagascar