Agricultural issues in Madagascar: Fert invites its partners cereal organizations in the debate

On September the 5th 2013, on the occasion of the arrival in France of Mr Harison Randriarimanana, former Minister of Agriculture in Madagascar, Fert has invited the leaders of the cereal group* to talk with him on agricultural situation in Madagascar where Fert accompanies producer organizations since 1986. 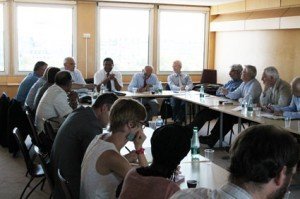 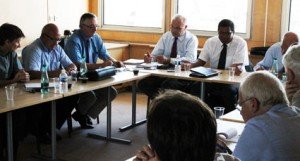 Mr. Harison Randriarimanana stressed the fundamental role of Fert to initiate and support processes that underlie all of these reforms, support for producers in their efforts to secure land tenure, establishment of regional funds for agricultural development, creation of agricultural colleges and integration of young people …

He also highlighted the growing role of the lead professional organizations (OPF), including Fifata, Senior Malagasy agricultural union in the provision of services to farmers and professional representation, playing a key role in negotiating with governments and other actors in the economic and social environment.

Today Sustainability Advisor to the Permanent Secretariat of the Action Plan for Rural Development (PADR), Mr Randriarimanana calls for the continuation of these reforms. Indeed, with 66% of family farms in chronic deficit, and a predominantly agricultural economy, Madagascar is a developing country’s poorest, despite abundant natural resources and unique biodiversity.
With the organization of presidential elections scheduled for next October, restoring the rule of law can we hope to return to a structure of agricultural services and a favorable agricultural investment legislation in favor of greater number, and first of Malagasy farmers.