Andris Piebalgs, European Commissioner for Development, went to Madagascar to confirm the return to normal relations between the European Union (EU)

and Madagascar and initiate discussions on the programming of EU funding for the period 2014-2020.

In this context, he delivered on June 12th in the Menabe region accompanied by the President of the Republic (Hery Rajaonarimampianina), First Minister (Roger Kolo), and Ambassador of the European Union in Madagascar (Leonidas Tezapsidis ) to visit several projects co-financed by the EU.

Sustained by the Regional Fund for Agricultural Development (FRDA) Menabe, whose implementation was entrusted by the EU Fert, in partnership with Fifata action was visited. 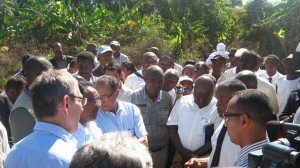 It was an action requested by users of the irrigated area Dabara: rehabilitation of canals and the establishment of ‘vannettes’ of water management 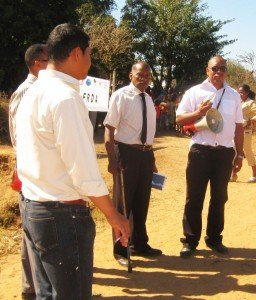 This meeting allowed Mamy Rajohanesa, Fifata administrator and president of Fund for Agricultural Development at the national level, Mahakosy Mercy, farmer and President of FRDA Menabe, and Thierry Mahonjo, Director of FRDA Menabe to present progress and needs of FRDA, so that the EU and the Malagasy government support the operationalization of the FDA, and financing system in the lasted.

We will see in the coming months if the meeting was successful.